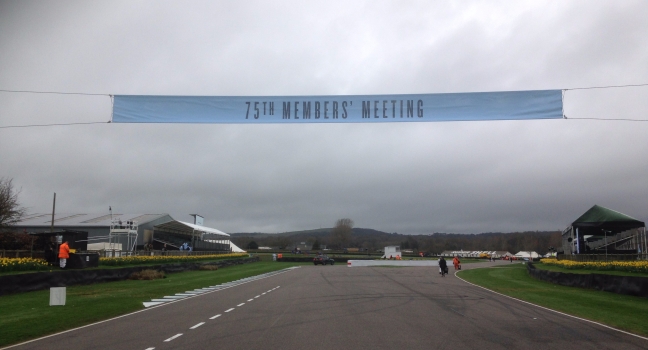 The historic circuit of Goodwood hosted the 75th Members Meeting at the weekend. These meetings started back in 1948 when the 9th Duke of Richmond opened the circuit and held the first in a series of meetings for members of the British Automobile Racing Club. They halted in July 1966, but were revived in 2014 due to members’ demand.

This is the second members meeting Andy and I have marshalled at, but this year was particularly special. Not only was it the 75th which is itself a poignant occasion, but is was just after the recent passing of the racing legend, John Surtees.

Being a long way from our normal marshalling ‘home’, organisation is key, but not everything went quite to plan. Forgetting a key part of your kit is never a good way to start as we discovered, when we realised late on Friday night that our marshal boots were still in our kitchen, 250 miles away! Thankfully, we pre-ordered some new ones form a local store and picked them up on the way way to sign-on, which we were still on time for.

The day had another unexpected start when we discovered the Incident Officer for our Post was unable to make the Saturday. Our Post Chief, asked me to step into the role, something similar also happened to me at last years race too. With the sudden step up into a role I wasn’t expecting to do or volunteered for, I called upon my other I/O’ing experience from numerous meetings last year.

This is always made easier if you have a good team with you, and that we certainly did. The team included a wide range of experience from trainee marshal with only a year’s experience up to a couple of us who have been doing it most weekends for the past eight years, not including our knowledgeable flaggies and Post Chief! The team gelled very well and this was quickly proven as there were a number of incidents on our first day.

The ‘highlight’ of this had to be a car who had blown it’s engine which briefly pulled-off at our post before continuing, leaving a huge trail of oil, around four posts on the circuit. Clearly it needed dressing, but with a few marshals, some cement dust, a shovel and a brush, it was sorted very quickly!

We also discovered how handy it can be to have some loose change in your pocket, as a Formula 3 car got ‘collected’ at the start of their race, it was sadly unable to continue due to nosecone damage. Normally this would have required recovery at the end of the session, but with a handy one pence piece, the driver was able to extract what was left of his nosecone and drive his vehicle back to the pits! We were left equally as amazed.

The other thing about Goodwood is the social aspect. The members meeting sees an array of entertainments including a fun fair, food/drink stalls, dancers, musicians and more. It’s good to be able to get out of your overalls and enjoy the party-like atmosphere, socialising with fellow marshals and old friends. Saturday is always rounded off with the most stunning firework display, and this year once again did not disappoint.

Travelling so far, it’s always good to be able to marshal for more than just the normal one day. Sunday saw us back on Post Four with nearly all the same team, but with the added “proper IO” with us. Post Four certainly had more than its fair share or incidents, with the team once again rising to the challenge of varied incidents, whether they be car or bike! We even had a major incident to attend to after a coming together between two cars that saw neither of them going any further and the race being red flagged. One managed to limp to Post Five, but the other one stayed with us. It is always good to see a driver leap out of a car so quick and over the barrier, or in Goodwood’s case, over the wall of tyres. Once again the team was efficient to ensure that all parties and cars were dealt with accordingly, with the track cleared and racing ready to resume.

As the sad passing of John Surtees, the only world champion of both two and four wheels, was so close to the meeting, it was only natural that a man entwined with motorsport, should be given a fitting tribute. Instead of silence, a ‘minute of noise’ was made, as every car and bike in the paddock revved their engines to remember a true gentleman and talented racer.

Let us not end on a sad note, the tribute was just prior to the final race of the meeting; the John Surtees trophy. Although the chequered flag was called a few minutes early due to poor light, it left me and many others, with a feeling of real privilege to have been fortunate enough to marshal, watch some great racing, and take part in such a special event.

If you want to become a marshal or you are interested by what you’ve read and want more information, visit the BMMC website here to book a taster day or to sign up.

My Tweets
Follow A Life In Orange on WordPress.com

Wigan
We aim to respond to all messages between the hours of 10am and 11pm.

Message from the Author

I hope that you find this website as enjoyable and as interesting to read as it has been for me to write and bring you these experiences.

Please feel free to explore the website as much as possible and if you want to write your own story then please contact us.